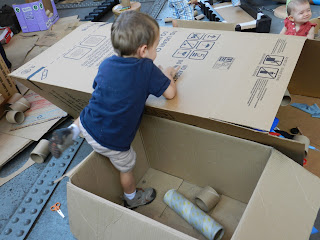 Symbolic play is the pretend play, the play in which the significance of objects and actions changes in order to respond to a hypothetical situation. In the symbolic play children use the objects not only with their conventional use, but they give them a different status, adjusting them to their needs and ideas (e.g. a little box becomes a car or train). Also, they reproduce behaviours, their own or others’, and so they imitate for example that the dad sleeps, they feed their doll etc.

The symbolic play appears after the first year of life and is characterized by the capacity of mental representation. Important role to the development of this capacity is played by the conquests of the child in the field of language, especially the ability to distinguish the symbols (eg the word “car”) from the objects that are referred to (eg the car itself).

The importance of symbolic play
The symbolic play is an important bridge with the reality, it satisfies emotional and cognitive needs and it’s crucial for the “initiation” of the child to the culture and its values. Furthermore, it minimizes the impact that an action could have under other circumstances, and so it helps the child to express itself and learn in a pressure-free environment. Thus, they are created the suitable conditions for experimentation, exploration and use of objects or and roles with imagination and originality. Also, the child expresses needs, desires, feelings and prohibited behaviours and experiences roles of everyday life.

Vygotsky’s theory about pretend play
Play is not just a prominent feature of childhood, but it guides the development, it’s the “driving force” of the development. “As in the focus of a magnifying glass, play contains all developmental tendencies in a condensed form and it is itself a major source of development. In play a child always behaves beyond his average age, above his daily behavior; in play it is as though he were a head taller than himself… play creates a zone of proximal development” (Vygotsky, 1978). 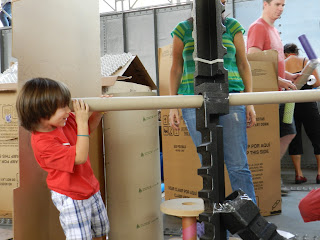 Why children play?
The child of preschool age, to overcome the tension of the many unfulfilled desires/ needs (which cannot be fulfilled immediately), plays and his play allows him to carry out these needs through imagination. These needs create the “imaginary situation”; the child creates the imaginary situation in his play as long as his needs/desires are not fulfilled in reality.

When objects lose their determining force?
In play, the child is acting based on the meaning rather than on the real object. So, he acts independently from what is in the visual field and his action is consequence of ideas rather than objects. The substitute object acquires its meaning not from its external similarity with the real, but because it permits child to act as he would act with the real object.

A sister with a clear role!
At the symbolic play of roles, characteristics and rules implied by the role and which are not so clear for the child in the daily life, are becoming clear by playing the role. That go unnoticed in real life of the child, becomes rule of behaviour during the play. This maintains the understanding about the role, but also it “requires” the child to use the characteristics of the role as rules.

A candy that is not eaten!
Playing, the child does everything he wants, but at the same time he subjugates himself, by will, to rules and he renounces his most delightful habits. He will never eat the candy when this, under the rules of the game is not eaten- it’s the wheel of his car.

Therefore, in the game…
-the child achieves the maximum self-control and at the same time does that he likes best, he has the greatest self-determination
-the child achieves the first emancipation from the situational constraints
-the child appropriates socio-cultural practices.
Thus, play creates zone of proximal development
The child can behave above his daily development, in play it is as though he were a head taller than himself. The context of play creates the conditions to for operating in a more advanced level, even when the child plays alone.

Eleni Skafida, Greece. She is 22 years old and studied on National and Kapodistrian University of Athens, at the Faculty of Early Childhood Education from September 2008 to July 2012.
She has a great interest in education of little children and she's searching for alternative approaches and ways of educating. She truly believes in the power of play on children's development and its role as an educational teaching strategy. She's also researching on children's literature and books but also on new technologies in education.
She is a volunteer of AthensPlaython, and took part in 2 festivals where children played and created their own original Olympic sports.

Posted by Carolina García at 1:29 PM

Email ThisBlogThis!Share to TwitterShare to FacebookShare to Pinterest
Labels: play